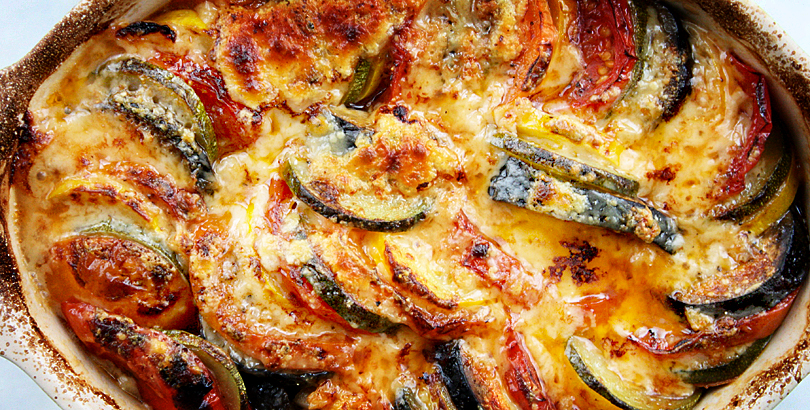 This classic recipe is a combination of the vegetables that grow so abundantly in the South of France.

1. Preheat the grill (broiler). Cut the aubergine into 2cm/ ½ in slice, then brush with olive oil on both side and grill (broil) until lightly browned, turning once. Cut the slice in to cubes.
2. Heat 15ml/1 tbsp of the oil in a large heavy pan or flameproof casserole and cook the onion over a medium-low heat for about 10 minutes until lightly golden, stirring frequently. Add the garlic, pepper and courgettes and cook for a further 10 minutes, stirring occasionally.
3. Add the tomatoes and aubergine cubes, dried herbs and salt and pepper and simmer gently, covered, over a low heat for about 20 minutes, stirring occasionally, until all the vegetables are tender and the cooking liquid has thickened slightly. Serve hot or at room temperature.

Variation
To skin the pepper and add flavor to the ratatouille, quarter the pepper and grill (broil), skin side up, until blackened. Enclose in a plastic bag set aside until cool. Peel off the skin, then remove the core and seeds and cut into strips. Add to the mixture with the cooked aubergine.